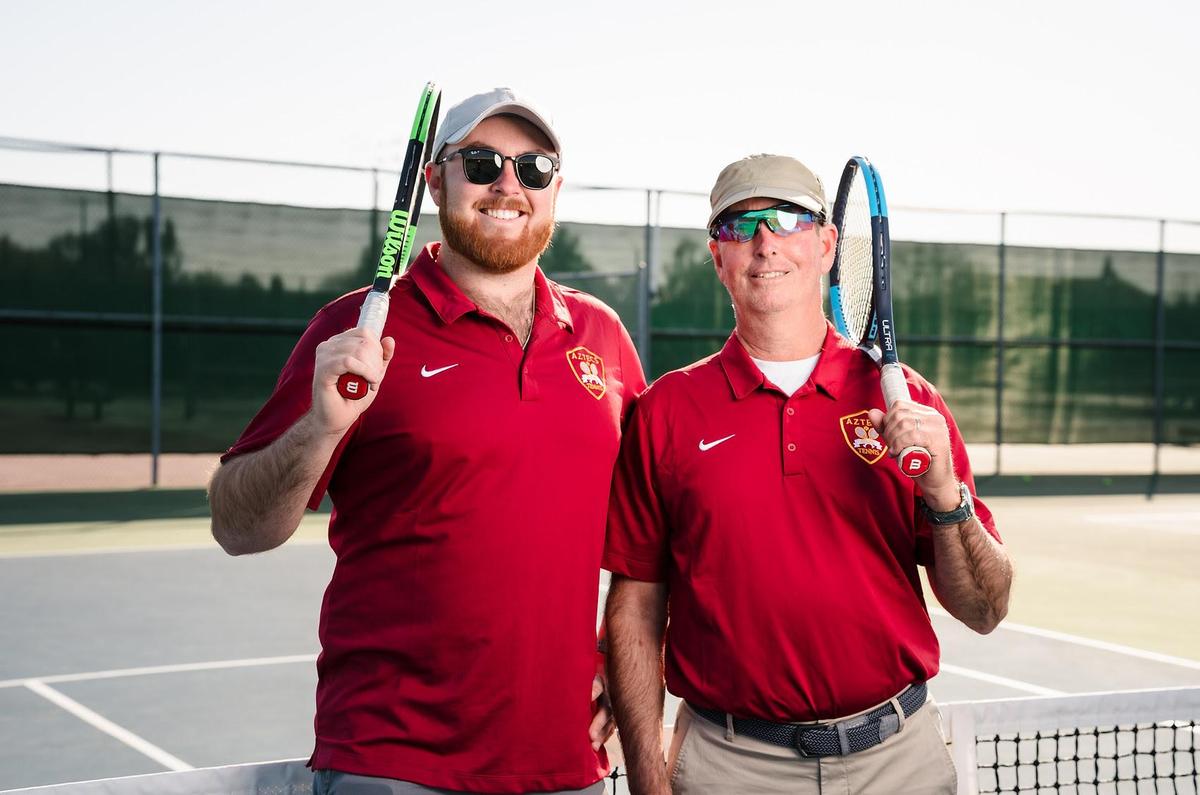 Leading a team of tennis players is no easy feat and requires some of the most experienced and patient minds in the game. That is why Esperanza High School Men's Tennis Team is so fortunate to have coaches Bill Nardi and Davis Nardi lead our team. Bill and Davis Nardi  are a father and son team. They have both enjoyed playing. tennis their whole lives and have a wide range of qualifications.

Coach Bill was Captain of his high school team at Rolling Hills and went on to play competitively in college. He became Captain at Cal State Long Beach and traveled the country with the team for tournament play. After college, he played on the ATP qualifier tour then spent 20 years as a Tennis Pro, teaching mainly at the Racket Club of Irvine and Anaheim Hills.

Coach Davis has a degree in Psychology and Leadership Development from Chapman University and has taught Environmental Science for two years. The combination of their skills in tennis and teaching has nurtured the EHS tennis program, more than doubling the size of the women's and men's teams since their tenure. 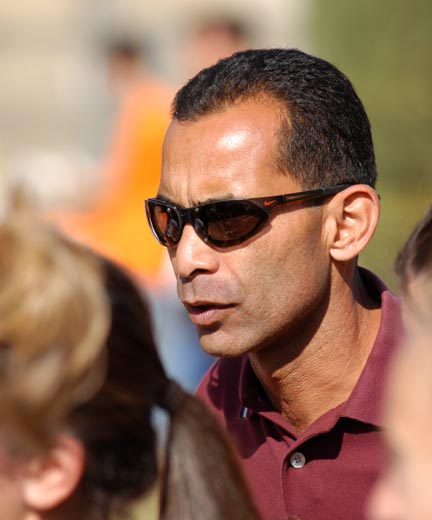 He then attended Cal State Bakersfield (CSUB) on a track scholarship and graduated in 1981 with a Bachelor of Science Degree in Physical Education.  He was a national finalist in the steeplechase at the 1980 NCAA Division II National Finals and ran on the Cross Country team at CSUB. Coach Medellin is still the school record holder in the 3000 meter steeplechase at CSUB. Coach Medellin received his teaching credential from Cal State University at Fullerton.

Head Coach Rich Medellin is currently in his 32 year of teaching at Esperanza High School.  He works in the mathematics department where he has taught numerous classes at various levels. He has been a university assistant to UC Irvine and other major universities helping student teachers in their intern semester to gain experience in the classroom prior to becoming credentialed to teach on their own.

Coach Medellin earned his Masters of Arts Degree in Coaching and Athletic Administration from Concordia University in Irvine, in 2009.

Coach Medellin has been on the CIF Coaches Advisory Board and has represented the California Coaches Alliance at the CIF board meetings. He has authored several rule changes over the last 35 years, most recently allowing teams to have more than nine runners eligible to run in the CIF prelims and finals.

Coach Medellin has been married to his wife Susan for 30 years and has a beautiful daughter Kaleigh Ann who is now 22 years old. Kaleigh was a member of the Esperanza Cross Country and Track teams. His wife Susan works for the Placentia-Yorba Linda School District as a Health Clerk at three elementary schools. The Medellin's reside in the East Lake development in Yorba Linda, California. 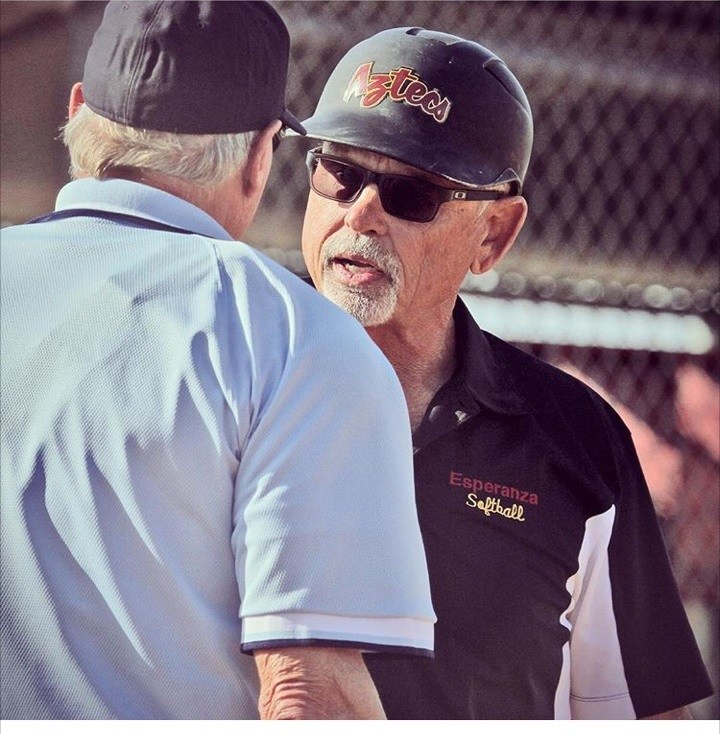 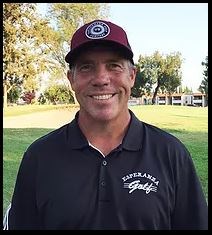 Orange League Indiv. Champ 1986 (Brea-Olinda H.S.) CIF Southern Section Individual Co-Champion 1989 Honorable Mention All-PAC 10 Selection @ ULCA 1993 and 1994 Have been coaching golf here since 2004.... varsity coach since 2010. Century League - North Hills - Champs (girls) 2016 and 2017 I am proud of the work ethic and dedication that these student-athletes have put in over the last few years. Our boosters and players are committed to excellence, and I'm fortunate to be a part of it. 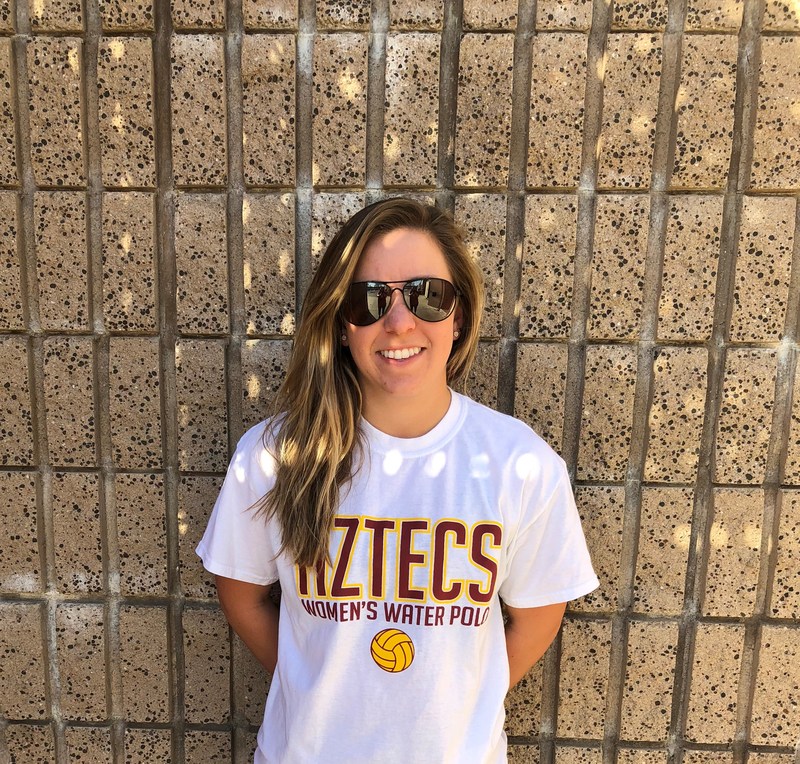 Ashley Diaz is a high school and club water polo coach with over 10 years of playing experience. Ashley began her water polo career at the age of 5 and has since earned high honors from both her high school and collegiate experiences. She was born into aquatics with her father a head coach and national team athlete with 30 years of experience and strove to make a name for herself in the aquatics world.
Prior to her coaching career Ashley competed in swim and water polo at the varsity level for 4 years at Esperanza High School. She was a two time MVP, two time First Team All League Athlete, team captain, and top ten player in Orange County on for three years. Her team was the first to make it to a CIF Division 1 playoff in 6 years. As for her swim career, she was a part of the 2012 CIF Champions for Esperanza.
As she moved on to the college level, she chose to play at Long Beach City College for Olympic veteran Chris Oeding and time coach of the year at the high school level, Dave Kasa. There she was a two time team captain, earned First Team All Conference, earned All American Honors, and was nominated for Female State Scholar Athlete of the year in 2015. She led the Long Beach City College team to their first Conference Championship in five years. After completing her career in water polo, she went on to coach Frosh/Soph water polo at Esperanza High School and in 3 years took on the Head Coaching position at age 23. She has  completed a Bachelor’s degree in Business Finance and is currently working on her teaching credential.